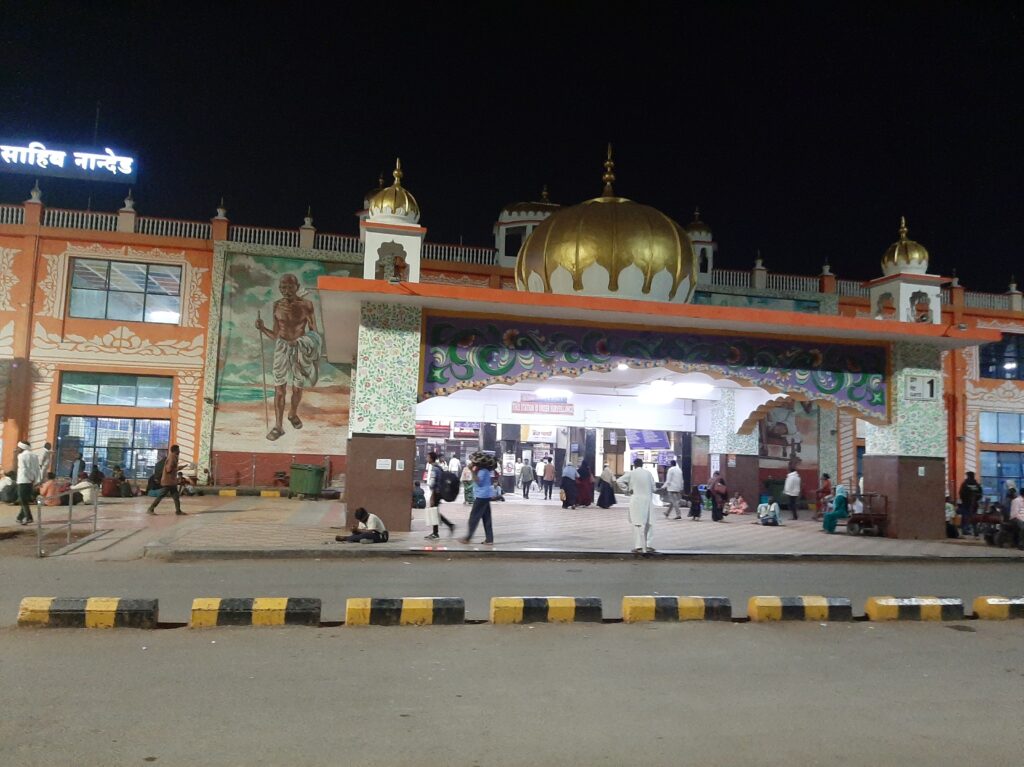 As you can see in above pictures there were local people who are selling tea , water bottles, snack etc in railway station which helps to passenger to purchase anything easily. In railway station there were sitting arrangement of steel benches for comfort of the passenger as well as there were marble sitting stones are there and these stones have charging point so that you can charge anything what you want with your charger. As you can see some education coaching banner or advertisement was put on those stones which is a very good type of advertising.n railway station there were many porter or coolie which were helping the passenger with their vehicle. Porter or coolie charges were not high but moderate even common people can afford that.

Toilet are the must need of human beings that’s why in Huzur Saheb Railway station there different toilets at different location for comfort of people. Our not gonna cover all those but sharing you one of them. So there is a large waiting area where people are waiting and there were drinking facilities . There were pure drinking water with RO machine. And this machine is donated by Gurudwara Sachkhand Board Nanded. There were many pressing taps for drinking water. And generally pressing taps saves more water than normal taps. There were different toilet section for privacy.

There were different shops in different places of railway station. In the picture, there were two shops.First one is for fruits, fruit juices, pad items, snacks etc stall and other one is for dairy products like milk, yoghurt, butter etc etc.

In above picture, There is the entrance of main gate of railway as you know we entered from second gate if you don’t then check out previous blogs on this topic. So In the entrance there were sign boards which were showing directions of Escalator, Booking office, Retiring room and lift. There were Dustin or garbage cans for cleanliness. There were security check up machine which off due to covid-19 restrictions. There were huge yellow coloured board on the top of the entrance wall which is showing direction of the areas of the railways station also there were huge blue board which is describing about train directions and its number. There were retiring room which consists wheel chair for disabled people for their comfort.The charges of rooms are Rs.800/- first 24 hours and Next 24 hours Rs.1000/- for AC Double bedroom and Rs.400/- first 24 hour and Rs.500 for next 24 hours for Non-AC Double bedroom also Rs.60/- for first 12 hours and Rs.75/- for next 12 hours for Non-AC Dormitory. 11 total rooms were there and 8 rooms for Non-AC Dormitory, 2 rooms for Non-AC Double bedroom and 1 room for AC Double bedroom.There were enquiry office for convenience of people and these rooms were booked through enquiry office.

Free Bus Sewa Takhat Sachkhand Sri Huzur Saheb Nanded is available in railway and there were booking office and separate counters for gents and ladies for their comfort. For advertising there were contact number of responsible person. There were beautiful drawing on the wall of railway station. There were CoTVM, ATVM, SBI ATM, Axis Bank ATM etc for people. Fully AC rooms and having hygiene .

There weremergency assembly point which was a large hall having ground floor as well as first floor. There were dustbin or garbage cans for cleanliness and Covid-19 precaution poster or banners on the walls which I covered in first blog on this topic.

Outside Area of Huzur Saheb Railway :-

After entrance hall, we were outside of railway station. In outside there were auto rickshaw parking where auto rickshaws were parked. There were parking of two wheeler as well as four wheel. The review of parking I covered in first blog so check that out. There were beautiful way for people who are walking or going on foot.

This is the main front view of Huzur Saheb Railway station of Nanded and that it for the blog. Now finally we informed you the whole Railway station in 4 blogs including this and this is very lengthy topic but we covered The blogs are in transportation blogs category so you must check that as well.

So Guys that’s it for this blog. I hope you will love this blog and do not forget to share with your family, friends and loved ones. If you guys liked this blog then make sure to do comments for more food blogs.

Expecting you really want to ask anything then, at that point ask in comments section or check our Contact us page and message us. Expecting you had to be aware of our group then, similarly check our about us page. Don’t neglected to share our site exploreinhinglish.com .

Also check out our recent blogs