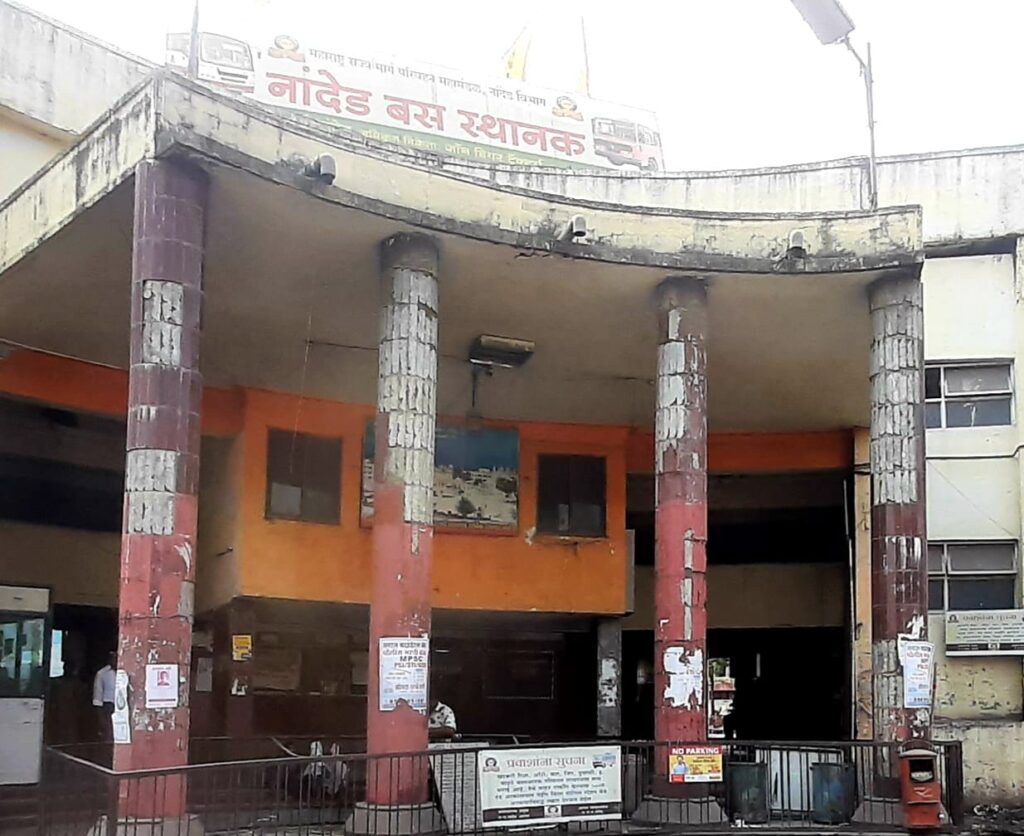 Hello everyone, So we all know that if we want to travel one place to another place in a cheap amount then we prefer Railways or Buses. They are cheap so that even low class and middle class can afford them. We recently covered Railway of Nanded in 4 different blogs make sure you check that out in Transportation of Nanded category on our website but What about Bus Station ? So we decided to cover this topic in this blog and try to end it in a single blog . Let’s gets started. Me and my team had visited Bus Station of Nanded and we would like yo share our experience to you through this blog. This blog is also called as Bus Station review or exploring of Bus Station.

As we entered in Bus Station we saw this building which is divided into three directions Straight, Right and Left. Our team visited Bus Station at morning 10 to 12 am around so that more people will not able to appear in the pictures. First we are talking about Right Side.

On Right Side, There were a huge board. This Board is provided by Maharashtra State Road Transport Co-orperation. This board is giving information about all the Buses like which Buses going to some location and which is going to other location, which bus is available at that time or when particular bus came to bus stand etc etc. This board is very helpful. when internet is not as familiar as now people used these types of board for their information in the office these boards are also available in small size. But now Internet is in one of the essentials then this boards information is also available in website of application of Maharashtra State Road Transport Co-orperation. Also in Right Side, there were two cabins of Bus Station officers which helps you and co operate with you. There were drinking water taps. There were treasury office as well.

So, Now its time for Centre Area. In centre, first there were a ticket counter having two windows. This counter is used for purchasing tickets as well as cancelation of tickets. These tickets counter having cash of whole bus station so the cash is not be stolen or snatched by a thief it is fully covered with metalled rods and the officers in that cabin locked themselves from inside for safety purpose. After this ticket counter, there were a huge hall which looks like waiting area where people wait for their bus which is to be came in Bus Station. As you can see in above picture, there were sitting stones of marble is available for peoples comfort.

At last Left Side, This is the place where you board in your bus. There were five stops of Bus at a time and in each stop there where a board on top which giving information about buses of that stops. In above picture top, you can see work is going on because there were huge demand of buses and five stops are not enough so that they have to increase the space of bus station. In bottom of picture, you can see four stops number as 2, 3 , 4 and 5. Picture of 1 stop is below,

IIn first left top of above picture, That is the first stop of Bus Station. In upper right of above picture, I zoomed the board of bus stops which is written in Marathi language as we all know Marathi language is the most communicated in language in Maharashtra and Nanded is the city of Maharashtra State There were various sorts of transports came here like government transports and private transports too displayed in the image.

In centre of above picture , These buses are waiting for their bus stations look the number of transports are there. In upper right side, there were work is happening for increasing space of bus stop. In upper left, there were Vara Lodge which is for individuals who are not from Nanded but rather needs to move to one more area in a day or over 48 hours so they can remain in that hold up which is exceptionally modest in sum and close to Bus Station. There were likewise shops of neighborhood individuals in area of Bus Station which helps for the guests, travelers and their loved ones also.l people in area of Bus Station which helps for the visitors, passengers and their friends and family members as well.

Top of above picture, there were bitmoji is available to hide one of our team member which is not comfortable in that picture. So In bottom right of picture, there were another lodge, shops, hotels etc were available and in bottom left of picture, there were a huge building. In that building security of bus stop taking consideration by really looking at CCTV constantly. This entire Bus Station is covered with CCTV Cameras and these cameras being really looked at consistently. In above middle right picture, this is the parking of vehicles and those people parked their vehicle and entering in bus station. Bike leaving is free however four wheeler as well as three wheeler proprietor needs to pay Rs.15/ – for leaving which is exceptionally modest in light of the fact that they uncommonly deal with every one of the vehicles.

There were governments canteen is also available in Bus Station which very cheap as compared to locals but only few dishes were available in this canteen so some people prefer locals shops but majority of people use this canteen.

So Guys that is all there is to it for this blog. I want to believe that you will cherish this blog and remember to impart to your family, companions and friends and family. On the off chance that you folks preferred this blog, make a point to do remarks for seriously blogs.Expecting you must know about our gathering then, at that point, comparably check our about us page. Don’t forgot to share our site exploreinhinglish.com .